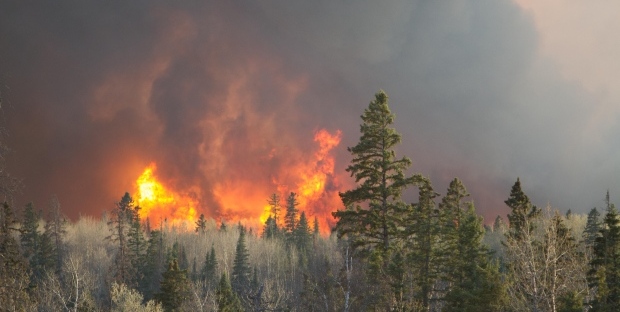 I didn’t go to work today.  I’ll admit it without any hesitation.  I’m not sick and I’m not playing hookie, so to speak.  I made this decision after spending an evening watching large clouds of thick dark smoke blot out the sun and wild flames engulf acres of trees.  I made this decision because of the forest fires that now surround the community in which I live.

Forest fires are not exactly an unfamiliar presence in my current hometown of Fort McMurray, Alberta.  Since our arrival in 2011, we have endured 4 summers which have largely consisted of a smoke from fires as far away as 600 kilometers and as close as 50.  It’s become so common place in my summers here, I usually don’t even give it a second thought; these fires are a part of nature and a part of the area we live in.  Waking up to a world clouded in smoke is not as disconcerting as it used to be. 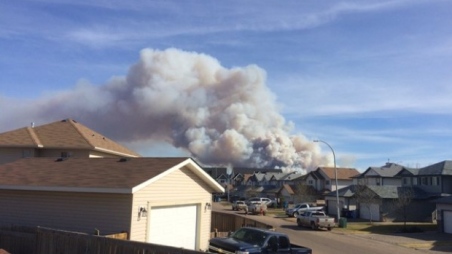 Yesterday afternoon, I watched as the smoke began to tower above our city, casting large shadows on the people below.  I became increasingly aware of the sun turning a sickly orange-yellow colour as the air around us changed.  The pictures suddenly hitting social media sites showed not only smoke, but flames as well.  The news reports started to come in and then we realized that there was not one, but two separate fires burning; one south of town and the other was blazing within the city limits just north.  Both of these fires were reported as out of control and the fire department and ministry were suddenly throwing everything they had at them.  The days of these fires being within 50 kilometers of the city were gone.  The radio stations and media were posting evacuation notices for a few of the residential and commercial neighbourhoods in the city as the fire came just outside of 1 kilometer away from the highway and inhabited areas.  This was the moment my attitude changed from something I had mistaken as being simply commonplace, to something that deserves a healthy respect and fear. 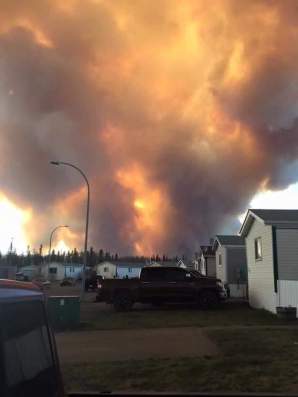 While our winters usually provide us with enough snow to make the springs here a rather wet process, we had no such luck this year.  Milder temperatures, and what snow we did have melted rather fast, producing incredibly dry conditions in almost record time.  In addition, people have been taking advantage of the nice weather conditions to go for trail hikes, camping as well as riding quads and other recreational vehicles.  While the campaigns surrounding forest fire prevention started much earlier than usual this year, they often don’t affect everybody in the same way.  Those recreational vehicles are still passing through incredibly dry brush without a second thought.  Campers are often burning campfires without dousing and smothering their fires properly.  There were was even a story I read this morning involving a truck headed to site throwing cigarette butts out the window of the vehicle.  Barring the fact that they were smoking in a work truck, there is no excuse for this kind of behaviour – least of all when surrounded by fiery doom.

While we can’t be sure what caused the fires at this point, and the previously listed behaviours don’t help, I would like to focus more on the community response that has come out of the last 24 hours.  In the case of aforementioned work truck that I have now affectionately dubbed the “butt-mobile”, I am happy to say that the witness reported these individuals to their employer.  In addition, moments after evacuation notices had been posted for certain areas, the local recreation facility at MacDonald Island open its doors to those who had been displaced.  Even more heartwarming was seeing many people in the community, people such as Hannah Fridhed and Dave Boutilier among many others, graciously opening their homes to those in need of a place to stay. 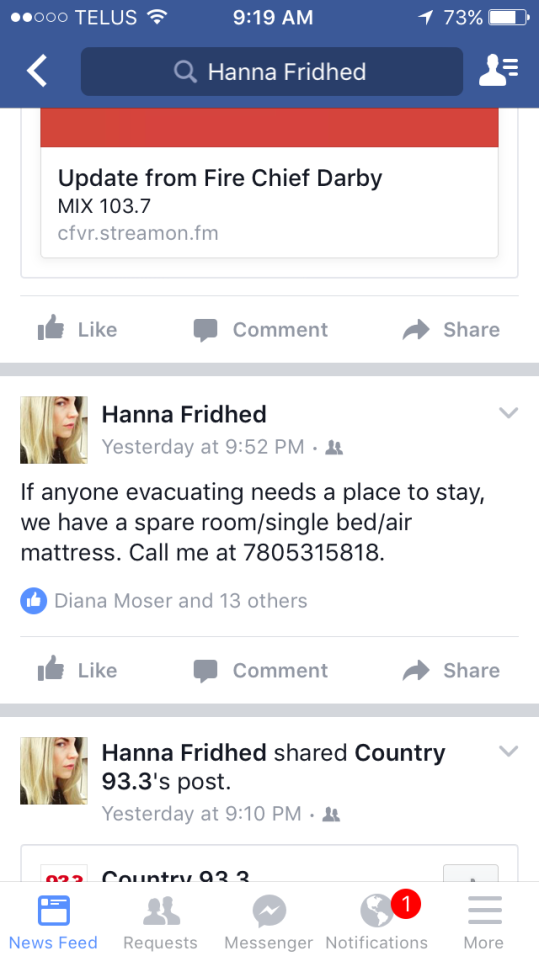 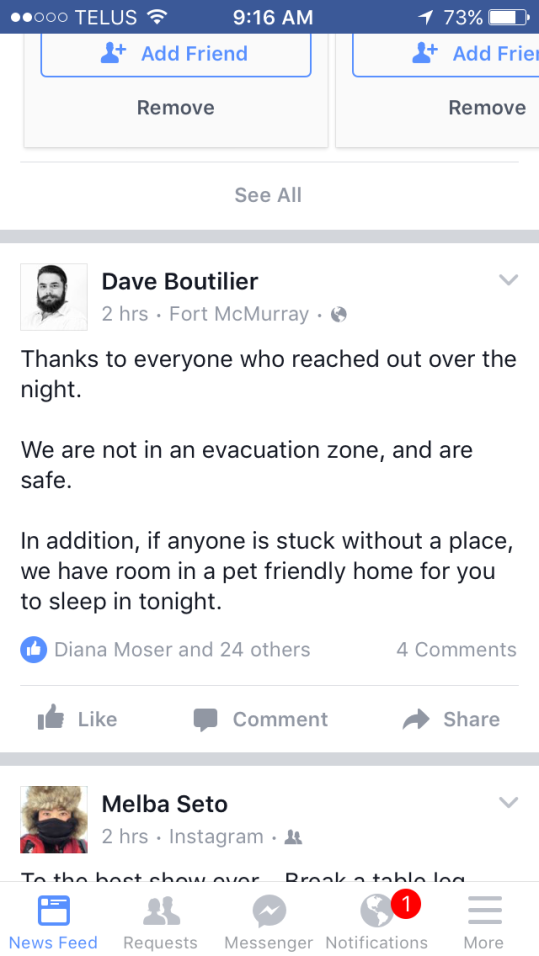 I would also like to extend my gratitude to those from the local media for continuing to provide accurate updates as best they could in what could only be described as a sea of social media scares, reports and misinformation.  There were a lot of people on Facebook, scared for themselves and their homes and there was a lot of information being passed around.  Luckily, there were individuals such as Mark Armstrong from 100.5 Cruz FM and Pete Potipcoe from Country 93.3 on air late into the night providing official and accurate updates as best as they could.  For those that do not know, both of these gentlemen are responsible for morning shows running Monday to Friday, so this is no their usual gig.

Even now, as I type at my home which is now surrounded by smoke (smoke that I literally watched roll out of the tree line and into our street), I can’t help but feel a sense of pride for the great community in which I live and the amazing people in it.

I did not go to work today.  The roads are open – yes, even the one that has a fire burning within plain sight.  Despite this, I felt my safety and that of my family should take priority.  While evacuation is unlikely at the moment, conditions can change rapidly.  I have witnessed this as the clear morning air in my neighbourhood turned to a muddled milky mess in a matter of seconds.  The fires continue to burn, although I am told they are currently being held – hopefully they stay that way.  Regardless of the severity, I am proud to live with these people and in this community.

We may be burning, but we always stand together in times of crisis.  This is no different, and together we will see the sun shine once again.

View all posts by CJ Bowers

1 thought on “Tales from the North: My World’s on Fire”

© CJ Bowers and The CJBuzz, 2015-2021. Unauthorized use and/or duplication of this material without express and written permission from this site’s author and/or owner is strictly prohibited. Excerpts and links may be used, provided that full and clear credit is given to CJ Bowers and The CJBuzz with appropriate and specific direction to the original content.